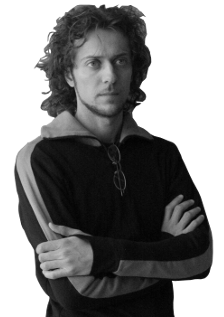 Andrea Olivazzo is born in 1974 in Turin where he studies and graduates in Architecture from the Polytechnic of Turin.

Turin is where he does his artistic and professional training and his career, which is divided between Italy and France, is totally dedicated to the development of an idea which combines the passion for design with the study of materials and art in its quintessential meaning that feeds on dreams and imagination, which draws inspiration from travel, encounters, images, Nature.

In early 2002, thanks to a scholarship of the European Community (Leonardo da Vinci project), he works for a short time at an architecture and design studio in the French city of Clermont-Ferrand.

Following this work experience abroad he dedicates himself to the construction of designed objects, prototypes fully designed and produced in his studio adjacent to the hills of Torino.
In a short time, he creates Sculture Luminose, lamps made primarily of aluminium and wood with harmonious, clear and aesthetic shapes, for premises, offices, homes.

In November 2002 he has his first solo exhibition of luminous sculptures in a gallery in the centre of Turin .

A few months later, in early 2003, he is selected to exhibit at a gallery in Rome with a group of artists, authors of self-made design objects.

From early 2003 he starts to work with Cottolengo, the social and religious body of Turin, as operator and manager of a Painting and Craftwork studio for the disabled.

In December 2003 GAI (Young Italian Artists) and Bjcem (International Association for the Biennial of young artists of Europe and the Mediterranean) select Andrea Olivazzo together with 14 other artists to exhibit in a travelling exhibition at some ARCI circles in Turin.

During 2002/2003 he exhibits in prestigious design and furniture shops in Turin and Milan.

In  2004, together with a group of young professional architects, he founds “Neo”  a group that specialises in building renovation and furniture design.

In April 2004 he exhibits a number of luminous sculptures at the Di Liddo and Perego company stand during the International Furniture Exhibition of Milan.

In October 2004 he has his second solo exhibition at the gallery Il Calamo.
In October 2004 he is contacted by the furniture company of Di Liddo and Perego of Meda (Mi) to create two models of luminous sculptures (Lanka and Fuoco) which will be added to the catalogue 2005/2006 of the artistic line “Moda” published internationally.

In November 2004 he is invited and selected by the Piedmont Region to participate with a group of acclaimed designers of the region in the project “Design Workshop Paris 2005”, an initiative organised with the Institute for Foreign Trade of Paris, which envisions possible future collaborations between designers and French companies engaged in furniture production.

In April 2005 he exhibits a number of luminous sculptures at the Di Liddo and Perego stand  during the International Furniture Exhibition of Milan.

Since late 2006 he has collaborated with a number of shops in the city of Lyon(France).

In recent years critics have taken a great interest in Andrea Olivazzo so much as to dedicate a profile on him on the daily newspaper “La Stampa” and the publication of some of his lamps in renowned furniture magazines like “Cose di Casa” and “AD”. 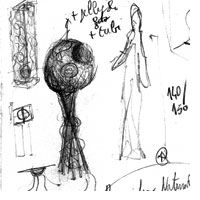 A unique atmosphere through shades and reflexions
which elegantly integrate into homes and offices.
Read more >>

All the materials are 100% recyclable and processing
is carried out by minimizing waste material.
Read more >>